These are sample documents of what students will recieve at the GSDC: 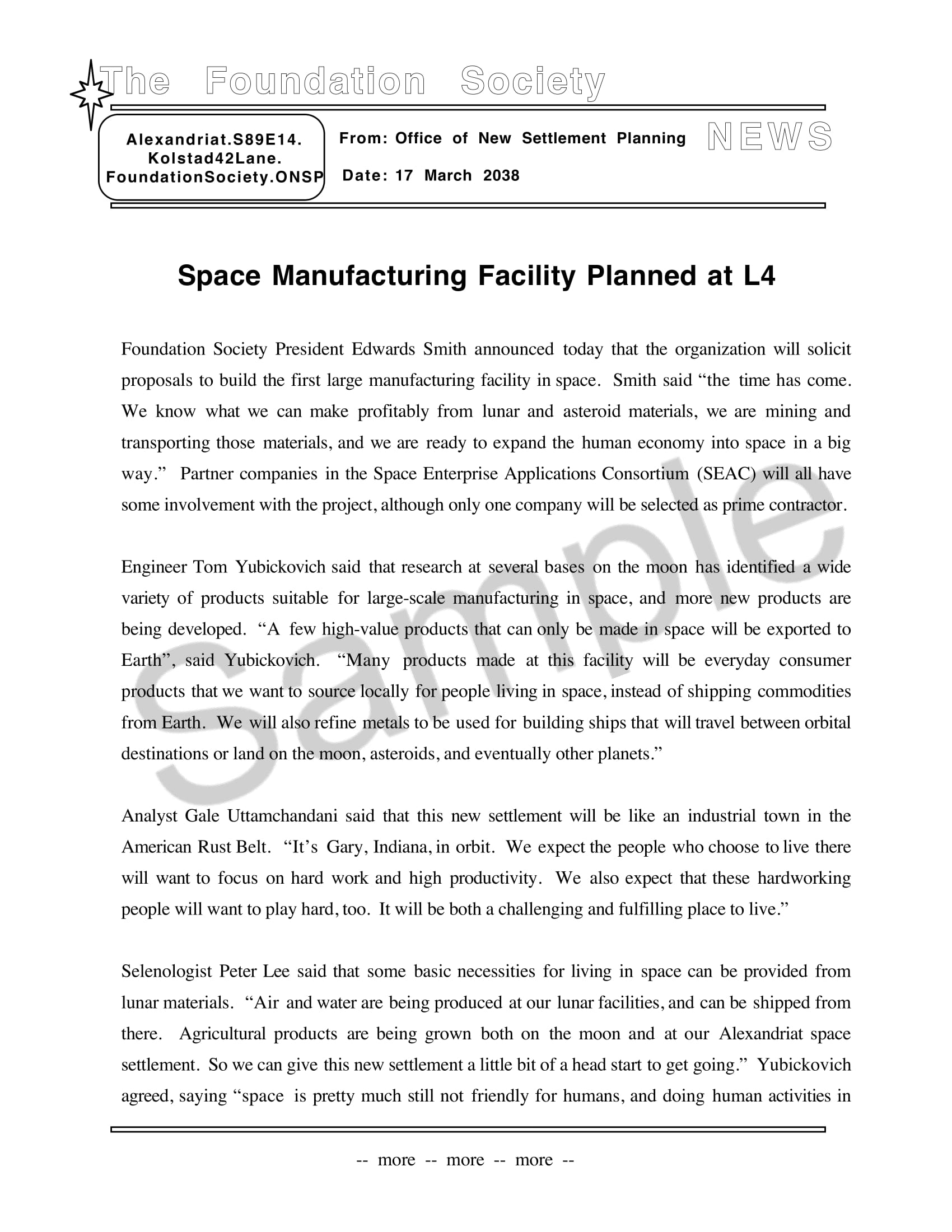 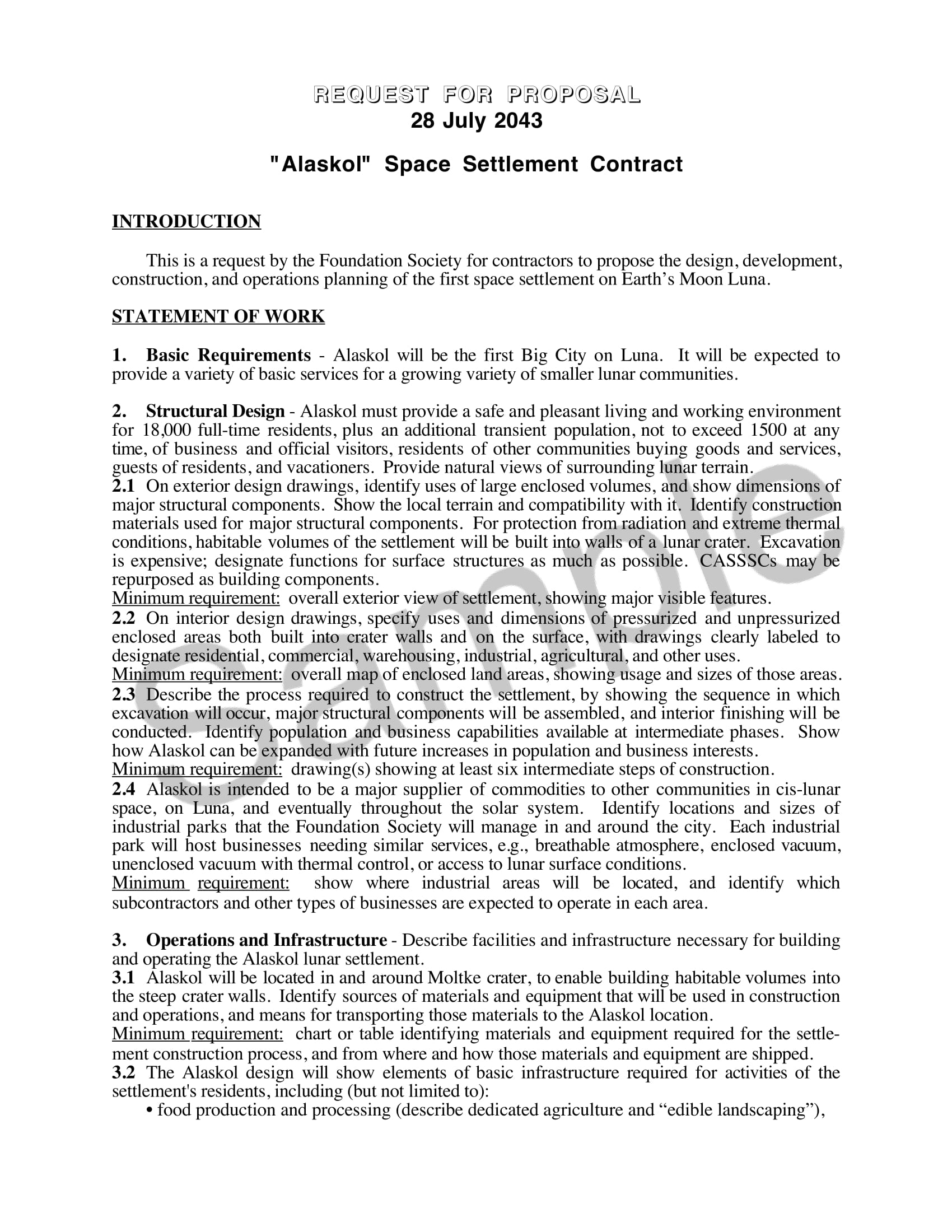 A Request for Proposal or RFP

This document is the RFP and will find the details of all of the requirements that your settlement must meet. Fulfilling all of these points is your objective for the duration of the competition.

The Foundation Society is an organization founded for the specific purpose of establishing settlements for its members in space.

The Foundation Society first gained recognition for its successful lobbying efforts with the governments of spacefaring nations to establish property rights in space. The system it caused to be enacted is based on the Homesteading laws of the American frontier: a corporation or even a person can claim an orbital location, an asteroid smaller than 10 miles in diameter, or a plot of land up to 10 miles by 10 miles in size, so long as it does not interfere with any other active claim. The claim remains valid so long as the claiming entity actively uses its claimed property; claims not in active use for four Earth years revert to unclaimed status and are available for another entity to claim.

The Society began more direct pursuit of its goal in the late 20-teens, when it led several grass-roots space advocacy organizations in fostering development of commercial infrastructure in Earth orbit. It first researched profit potential for launch vehicles providing lower costs per pound to orbit. Then the Society assured that new launch vehicles would have customers, by providing venture capital for companies developing new products that used the space environment or required launch services. The Foundation Society funded lobbying in the U.S. Congress that resulted in favorable tax and equity-protection laws for companies investing large percentages of their assets in perceived high-risk space ventures with long-range return. Then, it further assured a strong customer base for commercial launch services, with long-range commitments for government-sponsored scientific and exploratory space missions, and removed the U.S. government from the businesses of launch vehicle operation and space hardware fabrication. The results of these efforts encouraged American corporate interest in commercial development of launch vehicles and space infrastructure, which in turn inspired competitive interest in other parts of the world.

The Society outlined a master plan in the early-to-mid-2020’s for establishing major Space Settlements: in Earth orbit, on Earth’s moon, in Mars orbit, on the Martian surface, and in the asteroid belt. It amassed members and wealth to assure sufficient resources to begin implementing the plan as soon as economic reality permitted. The Foundation Society defined the primary condition for initiating this plan as a reduction of LEO launch costs to $1000 per pound.

In the late 20-teens, several major aerospace companies decided to act on suggestions first made in the early 20-teens that there was a business case for repairing, refurbishing, and upgrading satellites in orbit–launching just the lightweight parts needing replacement, and installing them on heavy satellites structures with lifetimes limited only by what can be installed on them in the future. They formed the Space Enterprise Applications Consortium (SEAC) which pooled corporate resources to develop space infrastructure components. The companies turned to the Foundation Society to lead the project. Government partners in the International Space Station (ISS) turned over ISS ownership and operations to SEAC, which renamed it Space Station Freedom. In exchange, SEAC agreed to develop capability to capture space debris, some of which it will use for space parts and materials. The SEAC partners adapted existing ISS component designs to quickly produce space tugs, depots, transfer vehicles, and even lunar landing craft.

Foundation Society executives saw the request to lead the SEAC consortium as a major step toward their true goal of developing large settlements where thousands of people could live in space, and agreed to sponsor a modest space manufacturing facility as a small community orbiting just below the Van Allen radiation belts. Speedy construction was a priority, to enable the Foundation Society to start seeing a return on its substantial investment. Contractors for ISS elements were hired to build more of their space-qualified modules and solar panels, and the Society’s engineers created a modular design for a small community that would grow with expanding business opportunities, incorporating expended rocket stages as manufacturing bays. With addition of high-orbit Orbital Transfer Vehicles to maneuver target satellites to the facility and return them to their operational locations, a crew of 20 began experimenting with satellite recovery processes in 2024. Advantages of orbital refurbishment capability quickly became obvious: satellite upgrade hardware is small and relatively lightweight, and hence not expensive to launch; heavy satellite structures stayed in space.

The incentive for the SEAC partner companies and the Foundation Society to see Return on Investment for growing commercial space infrastructure caused rapid development of space-based technologies. Companies that had sponsored small Research and Development studies for future ideas to implement in space showed their findings at conferences, and companies formed teams to pool their ideas for more rapid implementation. Promising technologies that had been struggling without profits were suddenly the recipients of ample investments to make them practical. Development of large quantities of resources, power, and transportation services enabled production of large quantities of profit-making products; industry had the concepts to provide them, and only needed an incentive to unleash the designs.

The wisdom of aggressive commercial cis-lunar infrastructure development was proven when a global shortage of Rare Earth metals (used in manufacture of computers and other electronic devices) suddenly made asteroid mining financially lucrative. The Foundation Society expanded their habitat–essentially an orbital industrial park–to provide refining of lunar and asteroid materials, on-orbit manufacturing, and assembly; declared it to be the first permanent human settlement in space when it achieved a population of 1000 in 2031; and named it Alexandriat. SEAC infrastructure evolved, now including LEO spaceports Liberty and Independence, which serve as transfer ports for exports, imports, and passengers between Earth and space. Even the heavy structures of most new satellites are now manufactured in orbit from extraterrestrial materials, and capability has developed to build some satellite components less expensively than if they were designed, analyzed, and tested to withstand the rigors of launch. Relatively fragile components (e.g., antennas, lenses, sensors, and solar panels) have been found to be particularly amenable to in-space manufacture. Demand for increased traffic between Earth and space justified commercial development of new and more cost-effective launch vehicles; passengers fly to one of the three LEO spaceports for $600,000 per person, with a 250 lb. weight allowance for person and possessions. Increased commercial responsibility for space services, and resulting reduced costs, enable governments to invest more in exploration beyond cis-lunar space, including human missions to Mars.

Despite the policy that dirtside governments do not tax products imported from space, many space products are components in goods manufactured on Earth, resulting in increased economic activity–and hence tax revenues–world-wide. As a consequence, nations in which companies with significant space operations are based have seen government budget deficits reduced, to the point that budgets can be balanced and surpluses are being applied to eradicate government debt.

Although the Foundation Society has developed sufficient financial reserves to invest in expensive projects like Space Settlements, the organization’s goal is to build as many as possible, and therefore to develop an efficient construction infrastructure. To this end, it expects that lunar and other extraterrestrial materials will be used extensively in construction of its settlements.

Alexandriat was not purpose-built for everything now happening there. The Foundation Society intends to preserve Alexandriat’s core value as a center for handcrafting satellite repair, upgrade, and manufacture; and its role as an expanding research facility. Large-scale materials refining, heavy industry, and mass production will move to a second space settlement specifically established for these purposes.

Origins of the Settlement Names

The Foundation Society has established a convention for naming the new communities it creates, allowing initial residents personal choice in selecting names for their cities, yet providing some traceability of place and history. A suffix indicates location, and communities with the same suffix receive names in alphabetical order. Hence, the Earth-orbiting settlements are named Alexandriat and Bellevistat (“at” = “(in orbit) around Terra”).

Alexandriat (Earth orbit, L5) honors Alexander the Great, who in his time was a visionary thinker, an advocate of scientific knowledge, and expanded the civilization of the greatest empire the world had known to remote places where others dared not go.

Bellevistat (Earth orbit), loosely translated “beautiful view”, acknowledges the stunning views of Earth from its location, honors a variety of lovely places named “Bellevue”, and represents the Foundation Society’s vision that this manufacturing center will enable a bright future for human habitation of space.